What is the Internet of Things?

The Internet of Things manifests in so many ways and in so many applications that most of the time we hardly notice it anymore. Just recently, we asked our colleagues at mimacom what their favorite IoT device is and many answers and photos were sent in, proving that IoT is now an integral part of our lives: from vacuum cleaner robots to Apple AirTag location tracking to smart fitness wristbands - and these are just the examples we are familiar with from our personal lives! Despite this wide variety of applications, the IoT is based on general principles and modes of operation that apply to all examples:

Here are the 3 most important IoT facts at a glance

🚗 A car - reminds you to change the oil

🏃‍ A fitness bracelet - measures your pulse and counts your steps.

🛠 A machine - reports that a defective part needs to be replaced.

In other words, any object capable of transmitting data over a network can be used as a thing in the Internet of Things.

The two types of IoT data

The Internet of Things works by feeding data from things into a network to make the data usable elsewhere. In order for this process to work properly in all situations, different types of data are used, which are thus also particularly useful in different situations.

But how does a lamp know it's dark, how does a printer detect an empty cartridge, and what does it take for a chainsaw to indicate its position?

How the IoT works

IoT technology works with built-in sensors, actuators, software, and communication hardware. This setup allows data from the environment to be

IoT devices then connect to an IoT gateway or platform to relay the collected data. The data is also usually sent to the cloud for storage and analysis. 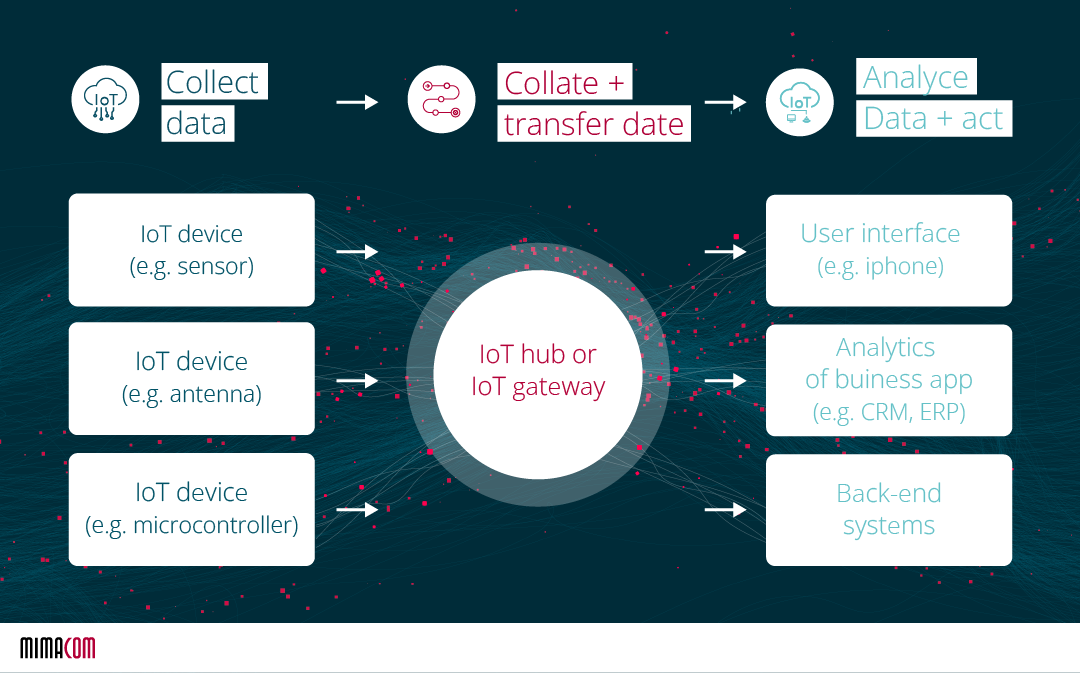 This means that before a fitness wristband shows on the display how active we were today, it sends the data from our jogging laps and workouts to the cloud. There, the data is processed and put into context with our personal information. This information finally ends up on our wrist: neatly processed into statistics, numbers and diagrams.

The devices thus do most of their work without any human intervention and in a fully automated manner - even though we can interact with the devices at any time, for example to set them up, adjust data or access information.

How did this interplay of technology, the internet and things develop? We take a brief look at the genesis of the Internet of Things and explain who first turned this ingenious idea from theory into practice more than 30 years ago.

The history of the IoT

There are different accounts of what was actually the very first IoT device in the world. Early examples include a Coke machine and a toaster.

In the early 1980s, a group of students created a Coca-Cola vending machine that reported the status of its contents via an internal network using built-in microswitches. That was even before the invention of the "World Wide Web". The first device to actually connect to the internet was a toaster in 1990: software engineer John Romkey managed to turn it on with the help of a computer.

Although the term "Internet of Things" would appear almost a decade later, the toaster gave a first taste of what was yet to come.

The further development of the IoT over the years

The use of IoT for companies

I have already mentioned a few examples that show how the Internet of Things is used in everyday life. In companies, IoT technology is mostly used in cases that are automated for efficiency reasons. This is exciting from both the company's and the customer's perspective. ➡️ Find out more about IoT and Data Engineering for companies

For the sake of illustration, let me break this down into two categories:

1 IoT as an advantage for companies

Since many of our customers come from the manufacturing industry, I am particularly familiar with these IoT cloud platforms. Many manufacturing companies want to leverage IoT to create a more efficient production line and work more effectively. They improve efficiency thanks to the Internet of Things. For example, by reducing downtime or making better use of raw materials. They become more effective through better or automated quality control.

2 IoT as an advantage for customers

What I also find very exciting is that even our customers’ customers benefit extremely from IoT technology. Suppose an industrial company that manufactures machines wants to use the Internet of Things for products that will later be used by customers. Instead of selling them, the company introduces a usage fee that allows customers to take the machines home and return them after use. This is a great advantage for end customers and opens up a new business model for companies.

IoT in companies: important for performance and customer experience

I believe that both goals are relevant and closely related. Using the IoT to offer customers added value automatically generates additional data that companies can leverage to derive insights and thus optimize their own performance. This results in increased customer satisfaction. The Internet of Things also enables companies to add digital services to their existing products while creating the basis for new products and business ideas - and such innovations are crucial! For many companies today, producing high-quality hardware alone is no longer a guarantee for success. Customers expect additional services to accompany the products they buy or rent.

Internet of Things: important for competitiveness

The IoT is therefore not only an increasingly important technology in everyday life, but will also continue to gain in importance for companies. Ever more companies are thus recognizing the potential of networked devices to maintain or boost their competitiveness.

The next article in our IoT series will show you the industries for which the Internet of Things is particularly relevant and how the manufacturing industry can benefit from this. Andreas Rehmann
Head of IoT Solutions
Andreas drives IoT-based business models at mimacom, calling it "the most important technology in everyday life." He is convinced that the IoT unleashes the full power of what can be achieved with technology in the first place, and so will continue to grow in importance.
Comments
×